Skip to main content
Buy $250.00 Check it out for Free!
Watch Intro Video

Very rarely in human history have a place and a people grown up together into a new culture. That is the American experience. Like the land and the people, so too the voice of this new civilization is distinctive, often raw, and always real. Remember, the men and women who founded the United States of America risked their lives to do so. What was it that made this thing called “independence” so valuable?

It is important to consider that what today we call “The Declaration of Independence” was called treason by England. If the Revolutionary War had failed, if the American farmers and planters had not been able to overthrow the largest military force in the world at that time, the Founding Fathers would surely have lost their lives at the hands of the British Government. That bold, independent streak that set the world aflame in 1776, echoes throughout American Literature.

From the earliest colonial voices, to the transcendental poets and essayists, to "THE" American literary form - the short story - and beyond, the literature of this newborn nation reflects the bold, independent push for liberty that birthed it. From Nathaniel Hawthorne, to Mark Twain, to Harper Lee - the authors of American Literature stare unblinkingly at their society, demanding we settle for nothing less than the best we can muster.

In this course we explore the unique voice of American Literature, with the hope that it will inspire both teachers and students to greater heights as well. Like the country from which it springs, American Literature tends to push envelopes, challenge traditions, and raise more questions than it answers. We will interact with the literature, wrestle with it, be inspired by it, and hopefully grow in our ability to analyze and appreciate the themes and ideas these pioneering authors present. 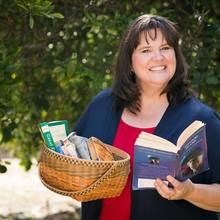 Miss Cara received a Bachelor of Arts in English from CSU, Northridge, where she graduated magna cum laude. A lifelong bibliophile, Miss Cara has been teaching Literature and English Composition courses for over twenty years now, finding that getting students talking about Literature is just as rewarding as reading it! Outside of the classroom, Miss Cara and her husband are co-ringmasters of their own "Family Circus," recently having graduated the last of their children from their own homeschool. Author of several children's books, and co-author of a set of devotional books (with her sister), Miss Cara is excited to provide literature courses that will empower parents, teachers, and students to take education into their own hands!Not all Rigor is Mortis!
Purchase American Lit Now: $250.00